Currently 24 countries have adopted a National Action Plan on Business and Human Rights1. In 2013 the United Kingdom became the first country to adopt an NAP; the Netherlands followed in the same year. In the years after that, there was a significant increase in announcements, with seven action plans adopted in 2017 alone.

Most recently Thailand introduced a National Action Plan in October 2019. Countries that have adopted NAPs are notable in terms of their economies, accounting for more than 45% of global gross domestic product (GDP) and over 43% of all global imports2. Those companies and countries that actively participate in and benefit from world trade are exactly the ones that bear a special responsibility for implementing the UN Guiding Principles.

The European Union has so far established measures in various policy frameworks to implement the UN Guiding Principles, including the EU Action Plan for Human Rights and Democracy and the European Consensus on Development.

These countries have already brought out an NAP: 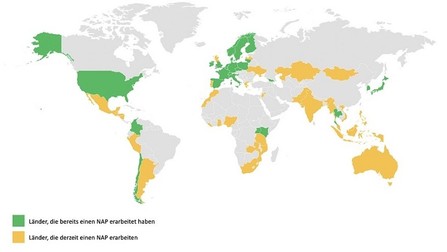 The UN Guiding Principles on Business and Human Rights, which were adopted by consensus by the United Nations Human Rights Council in 2011, are based on three pillars:

Currently, 16 countries are developing a NAPs on business and human rights.