A globalised economy requires a European strategy in the form of an action plan to effectively protect human rights in the supply chains of EU companies. The Federal Ministry of Labour and Social Affairs promoted the issue during Germany’s Presidency of the Council of the European Union in 2020; a concrete legislative proposal from the EU Commission is to follow in 2021.

On 1 July 2020, Germany assumed the Presidency of the Council of the European Union (EU) for six months. Given the ongoing Covid-19 pandemic and its various consequences for both society and the economy, the Federal Government has made overcoming the crisis the focus of its programme. The goal is for a stronger, fairer and more sustainable Europe to emerge from the pandemic.

Policies on the future international trade in goods and globalisation are also important in this regard. Corona has demonstrated how vulnerable global supply chains are, and the pandemic has made it clear that companies that are not familiar with their supply chains, that do not work together with their important suppliers, will not be competitive companies.

The Federal Ministry of Labour and Social Affairs is working hard to ensure that this debate is not limited to economic considerations, but also takes into account the protection of human rights, because although the crisis has exacerbated problems, the situation in producing countries is unacceptable regardless of Covid-19. Millions of people around the world work for starvation wages in slave-like conditions, sometimes six days a week for twelve hours or more without a break. According to the International Labour Organization (ILO), more than 150 million children are still being forced to work on plantations or in mines instead of going to school because their parents' wages are insufficient or they have lost their jobs. Around 40 million people are victims of forced labour or sexual exploitation.

Globalisation must not be confused with exploitation. The question is what the EU can do to contribute to decent working conditions worldwide. The EU is a key player in globalisation. Its companies play an important role. They can ensure that child labour does not occur in their supply chains at least. They can ensure that wages are fair, working hours are reasonable and attention is paid to the health and safety of employees at work.

At present, only a few companies are fully fulfilling their responsibility to ensure that human rights are respected in their supply chains. Many of them do not know their suppliers, and are hardly aware of the conditions under which their products are manufactured. There is simply a lack of uniform and binding standards.

Because of its shared values and because it is the world's largest single market with a share of 15 percent of all global imports, the EU has a special responsibility to take action against these abuses. The Federal Ministry of Labour and Social Affairs hosted the virtual conference "Global Supply Chains - Global Responsibility" on 6 and 7 October. The guests included European Commissioners Nicolas Schmit and Didier Reynders, the Director-General of the International Labour Organization Guy Ryder, Federal Minister of Justice Christine Lambrecht, Federal Minister of Development Gerd Müller, Portugal's Labour Minister Mendes Godinho and Slovenia’s Labour Minister Cigler Kralj, as well as representatives from Europe’s social partners from business and labour, civil society and companies. The discussions in panels and workshops mainly focussed on the question what form an EU action plan for human rights and decent work in global supply chains that strengthens corporate responsibility across the EU might take.

The outcome paper of the conference focuses on five areas of action:

The complete outcome paper can be found here.

Initiatives at EU level call for a European law

The European Commission has announced that it will present an ambitious EU-wide legislative proposal on sustainable corporate governance in 2021. It can count on the support of the Council of the European Union. In December 2020, the 27 EU member states supported a European supply chain law in the Employment, Social Policy, Health and Consumer Affairs Council chaired by Germany’s Federal Minister of Labour, Hubertus Heil. This is the first time that all member states have committed themselves to EU-wide binding legislation.

In January 2021, the Committee on Legal Affairs of the European Parliament also voted in favour of a concrete legislative proposal in an own-initiative report . The report was adopted by the plenary of the European Parliament in March by 504 votes to 79 (with 112 abstentions). According to the Parliament’s decision, companies will in future be required to identify, address and remedy risks in their supply chain. This includes activities in the entire value chain – including direct and indirect business relationships and investment chains. The required legal provisions not only concern respect for human rights, but also the environment and responsible corporate governance.

The scope of application of the law will be as broad as possible. In concrete terms, it is intended to apply to all large companies that are subject to the law of a member state or are established within the territory of the European Union. In addition to listed companies, the law will also apply to small and medium-sized enterprises that are exposed to significant risks. Liability under civil law as a means of enforcing the due diligence obligations is an essential part of the European Parliament’s proposal. In a next step the suggestions made in the report will be incorporated into the legislation planned by the EU Commission.

I warmly welcome the European Parliament’s proposal for ambitious EU supply chain legislation. The latest EP decision is in line with the Council Conclusions on ‘Human Rights and decent work in global supply chains’, which were adopted by all 27 EU member states in the Council of the European Union on 1 December 2020 under the German Presidency. It is good news that Germany is leading the way with its own national regulation. It is encouraging that the EP’s views on some points go even further than the recent national compromise. This is a boost for EU Commissioner Didier Reynders, who has my full support.

The adoption of a German law gives vital momentum to the European proposals. In addition, the German Council Presidency was the prelude to the presidency trio of Germany, Portugal and Slovenia. In the joint programme, Portugal and Slovenia have also committed themselves to further strengthen corporate responsibility at EU level. As a community of nations, the EU now has the opportunity of playing a pioneering role in shaping fair globalisation. 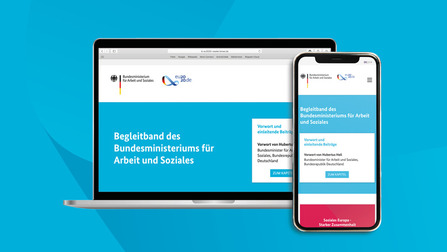 In the run-up to the EU Presidency, the Federal Ministry of Labour and Social Affairs engaged in a dialogue with representatives of European employers’ associations, trade unions, civil society and companies. The results are documented in a thematic reader to accompany the German Presidency of the EU Council. You can find the publication here.

At the virtual conference "Global Supply Chains - Global Responsibility," Federal Labour Minister Hubertus Heil discussed with high-ranking guests how human rights and good work can be better enforced in global supply chains. Find here the full results paper of the conference the Federal Ministry of Labour and Social Affairs hosted on 6 and 7 October.