The Federal Ministry of Labour and Social Affairs made human rights and decent work in global supply chains a priority during Germany's Presidency of the Council of the European Union.

On 1 July 2020, Germany assumed the Presidency of the Council of the European Union (EU) for six months. Given the ongoing Covid-19 pandemic and its various consequences for both society and the economy, the Federal Government has made overcoming the crisis the focus of its programme. The goal is for a stronger, fairer and more sustainable Europe to emerge from the pandemic.

Policies on the future international trade in goods and globalisation are also important in this regard. Corona has demonstrated how vulnerable global supply chains are, and the pandemic has made it clear that companies that are not familiar with their supply chains, that do not work together with their important suppliers, will not be competitive companies.

The Federal Ministry of Labour and Social Affairs is working hard to ensure that this debate is not limited to economic considerations, but also takes into account the protection of human rights, because although the crisis has exacerbated problems, the situation in producing countries is unacceptable regardless of Covid-19. Millions of people around the world work for starvation wages in slave-like conditions, sometimes six days a week for twelve hours or more without a break. According to the International Labour Organization (ILO), more than 150 million children are still being forced to work on plantations or in mines instead of going to school because their parents' wages are insufficient or they have lost their jobs. Around 40 million people are victims of forced labour or sexual exploitation.

Globalisation must not be confused with exploitation. The question is what the EU can do to contribute to decent working conditions worldwide. The EU is a key player in globalisation. Its companies play an important role. They can ensure that child labour does not occur in their supply chains at least. They can ensure that wages are fair, working hours are reasonable and attention is paid to the health and safety of employees at work.

At present, only a few companies are fully fulfilling their responsibility to ensure that human rights are respected in their supply chains. Many of them do not know their suppliers, and are hardly aware of the conditions under which their products are manufactured. There is simply a lack of uniform and binding standards.

Because of its shared values and because it is the world's largest single market with a share of 15 percent of all global imports, the EU has a special responsibility to take action against these abuses. The Federal Ministry of Labour and Social Affairs hosted the virtual conference "Global Supply Chains - Global Responsibility" on 6 and 7 October. The guests included European Commissioners Nicolas Schmit and Didier Reynders, the Director-General of the International Labour Organization Guy Ryder, Federal Minister of Justice Christine Lambrecht, Federal Minister of Development Gerd Müller, Portugal's Labour Minister Mendes Godinho and Slovenia’s Labour Minister Cigler Kralj, as well as representatives from Europe’s social partners from business and labour, civil society and companies. The discussions in panels and workshops mainly focussed on the question what form an EU action plan for human rights and decent work in global supply chains that strengthens corporate responsibility across the EU might take.

Because the fact is that almost ten years after the United Nations Human Rights Council adopted the United Nations Guiding Principles on Business and Human Rights, only a minority of European companies fulfil their human rights due diligence for their entire supply chain. Voluntary measures alone are therefore not sufficient to ensure that companies comply sufficiently with their due diligence obligations. What is needed instead is a holistic, strategic approach by the EU with an intelligent mix of legislative and supporting measures. The European Commission has already announced that it will present an ambitious EU-wide legislative proposal on sustainable corporate governance in 2021.

The outcome paper of the conference "Global Supply Chains - Global Responsibility" focuses on the following five fields of action. The overriding goal is to effectively protect people’s rights worldwide.

The cornerstone of an EU action plan should be binding human rights due diligence rules for companies. Companies would have to ensure that human rights are respected not only in Europe but along their entire supply chain. In particular they would have to assume responsibility for more than just their direct contractual partners. At the same time, effective legal regulation requires that due diligence obligations extend to all human rights and all economic sectors. Moreover, more than just a few large companies have to be covered. If companies violate their human rights due diligence obligations, they must face consequences and those affected should be able to enforce their rights in the courts of EU member states. It must be ensured that the legislation is proportionate for the companies and above all creates legal certainty.

A legal framework for human rights due diligence makes support and cooperation more important. EU-wide multi-stakeholder sector dialogues should therefore be one of the top priorities of a European action plan for human rights and decent work in global supply chains, because the market power of a European sector can bring about improvements that national dialogues alone could not achieve. Companies with the same market conditions can address the specific core issues of their respective industry in a targeted manner. Civil society organisations, trade unions and other stakeholders can contribute valuable expertise on human rights. With this bundled expertise, solutions can be jointly developed to provide effective protection where people are affected.

The sector dialogues need to have clear joint objectives, a clear roadmap and a transparent process involving civil society representatives, the social partners from business and labour and local stakeholders. All five core elements of human rights due diligence should be covered from the management's declaration of principles to the effectiveness of complaints mechanisms. Examples of good national practices can serve as models.

The European Commission should work to identify quality criteria for the preparation, content and effective implementation of national NAPs in order to vigorously implement the United Nations Guiding Principles on Business and Human Rights. Targets could be identified and formulated by the European Commission working together with the member states. These should also include the perspective of workers in the producing countries.

It is important to focus on structural causes and interrelated human rights issues in the fight against child labour, forced labour and human trafficking. Fair wages must be paid and universal access to social protection must be made possible. EU-wide legislation would significantly improve the quality of voluntary standards and certification, but these should continue to play an important complementary role. They would however have to become more effective and be taken into account in other areas, such as the EU financial sector, trade and EU development cooperation.

There must be a coherent system of access to remedy for victims of human rights violations committed by companies. It needs to give victims appropriate remedies in each individual case. Effective judicial mechanisms are central to ensuring access to remedy. The European Commission and the member states should also recognise the important contribution of out-of-court remedies. Together they should consider setting up an online tool to provide guidance to victims on the different complaint mechanisms.

You can read the full results paper here.

Germany's presidency marks the beginning of the trio presidency of Germany, Portugal and Slovenia: Portugal will assume the presidency in January 2021 and pass the baton to Slovenia six months later. The need to strengthen corporate responsibility at EU level is highlighted in the trio programme.

In the run-up to the presidency, the Federal Ministry of Labour and Social Affairs has already initiated a dialogue with representatives of European employer associations, trade unions, civil society and companies. Initial results have been documented in a companion volume to Germany's presidency. There you will find interviews, documentary material, academic contributions as well as opinion pieces and debate on the topics the ministry is focussing on during Germany's presidency. There is also a foreword by Federal Minister Hubertus Heil. You can find the online version of the thematic reader here.

In the coming months we will be presenting links to interviews, viewpoints and reports on individual initiatives with more detail:

The father of the United Nations Guiding Principles on Business and Human Rights, Professor John G. Ruggie, provides insight into the spirit of these 31 decisive Principles and looks at how they can be implemented effectively at European Union level.

Read the article here
In global supply chains, human rights violations continue to occur. Nina Elomaa, who is responsible for CSR at the Finnish Fazer Group, and Filip Gregor, Chair of the European Coalition for Corporate Justice, both advocate binding EU due diligence standards to improve the situation in producing countries.

Read the article here
Pierre Gattaz, President of BusinessEurope, recognises the responsibility businesses carry for human rights, but sees the risks associated with a binding EU-wide regulation aimed at creating a mandatory due diligence obligation for companies. Instead, he calls for companies to be supported in their endeavours to find solutions involving all actors.

Read the article here
Isabelle Schömann, Confederal Secretary of the European Trade Union Confederation (ETUC), advocates for a European directive to regulate companies’ human rights due diligence obligations. In her view, the involvement of trade unions and workers’ representatives and coherence with Europe’s industrial, social, environmental and climate policy will be decisive.

Focus Industries of the German Economy

For the purpose of developing sectoral dialogues, a study has identified 11 industries in the German economy which exhibit particularly relevant human rights risks along their value chains. Two of the study’s authors explain the methodology applied, summarise their results and formulate recommendations.

Low wages, precarious employment, poor occupational safety: conditions in the global textile industry are often problematic. Lisa Jaspers, who runs a start-up for fairly produced fashion and design in Berlin, has launched an online petition for legislation on human rights due diligence.

Hiltrud Dorothea Werner (Volkswagen AG), Michelle Wen (Groupe PSA) and Iztok Seljak (Hidria Holding) discuss the significance of human rights along global supply chains for a sustainable automotive industry, their expectations of policymakers and to what extent European sectoral dialogue within the industry impacts their own competitive environment.

For the European Football Championship, the ball is key. But how is the ball produced? The Pakistani city of Sialkot is considered by some the “world capital of ball manufacture” and in the 1990s it drew international attention for its child labour practices. But what are the conditions like today? An investigation.

The Generalised Scheme of Preferences (GSP+) is a key tool of the EU to promote sustainable development. In return for trade preferences, countries must ensure the implementation of fundamental labour rights, such as the International Labour Organization’s (ILO) Core Labour Conventions.

Faster, higher, further: sport is mostly about success stories. But there is something that many people don’t know: sporting goods are often produced under conditions that disregard labour and social standards. Michael Jopp, specialist promoter for municipal development policy in Berlin, wants to change this. With a nationwide campaign, he is fighting for more fairness in the sporting goods industry.

Beate Andrees summaries results and in-sights from the Alliance 8.7 Report on child labour and forced labour in global supply chains and points to opportunities for action by the EU and its Member States.

Find here the full results paper of the conference the Federal Ministry of Labour and Social Affairs hosted on 6 and 7 October. 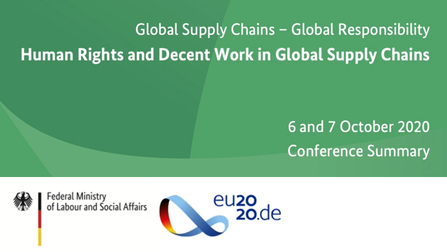 Film sum­ma­ry of the con­fer­ence